To Ask or Not to Ask?- That is a question…

Hi All,
Here’s the thing, yep, this is going to be a long post, settle in, I NEED you to. I have a dilemma. It’s one I share with a lot of Indy Authors. It’s a need to ask, request, impose on you, without ever wanting to ask, request or even hint of an imposition. A need to have support, without wanting to make the request implicit… It’s an Indy Author thing… and an Indy anythingthing… A need and a horrendous embarrassment all rolled into one… I should probably explain…
I wrote my first book in 2014. Well, I didn’t. I wrote it between 2001 and 2014, but it was finished in 2014, or so I thought. I figured I’d be faced with between 5 to 10 years of going cap in hand to publishers and agents to see about getting it into print… To be honest, I wasn’t that hopeful… Not because I didn’t think it was good, obviously I did (and thankfully so did some mainstream press reviewers later on) but I wasn’t hopeful because it wasn’t a book that could be put into a simple pigeonhole.
It was a mix of genres, set mostly in the UK, written by someone now living in Australia. All in all, it was going to be a difficult sell and heck, I knew the stories about Agatha Christie and JK Rowling and C.S.Lewis. All rejected again and again and again – You know the type of thing – “I’ve written a book about a big lion.” – We don’t do wildlife… “It’s got a witch…” – We don’t do horror… “It has a wardrob– oh never mind…”
As an alternative, I didn’t fancy the idea of Vanity Self-publishing. That’s where you pay a lot of money to get a lot of books printed, then try to flog them off… or more usually, you get a lot of books printed, then end up with them insulating your loft…
So, I decided to try what was then relatively new (still is I suppose) – Publish-on-Demand Independent Publishing – A way of getting your book into the world, available internationally and on sale through Amazon, other on-line retailers and the occasional (if you can convince them) bookshop.
It puts all the reliance on the author – get an editor, get a designer for the cover, get everything else and run all the publicity and marketing yourself. Set up the author appearances, convince bookstores to stock your books, get reviewers to review them. All of it can be done. It merely takes time and effort, but it can be done. However, there is one massive disadvantage. The marketing. The big publishers have it sewn up and have the resources to make a huge impact for their ‘next release’. The rest of us Indies, have to chip away at it and social media is one place where that can happen better than most. But, social media needs people to share our posts and promote our books. Without that, we have huge limitations and that need for sharing is the problem.
You see, the request to share usually starts with friends and family. Of course it does, for that’s where most Indies begin, with their inner circles… and it comes with that awful requirement to ask for assistance. Especially horrendous if you believe the old adage that “a friend in need is a pain in the neck…” (and yes, I cleaned that up from the original). So the simple requirement of having to ask their Facebook friends is considered an awful imposition. A huge, massive, horrendous imposition, for we NEED them to click share to promote our page and our posts. NEED, not want, but NEED, if we stand a chance of building up a following. Of course, that is only the beginning.
We then NEED our followers (and those who have read our books and liked them) and friends of friends, to continue to like and share our page and our posts and that too, is an imposition. Especially difficult if you hate asking anyone for anything and the idea of ‘borrowing a cup of sugar’ fills you with dread… But, for an Indy author, if you want your book to reach a wider and wider audience and you don’t have thousands and thousands of dollars or pounds to throw at the problem, then it is one of the few ways to do it.
Obviously, there can be sweeteners, little incentives. As in, “My next novel is coming out, like and share to be entered into a draw for signed copies, or a free download of short stories, or a tin of beans?” and those do work quite well, (maybe not the canned goods) but first and foremost it comes down to asking your friends in real life and on Facebook to share and share and share again.
So, if you are a Social Media friend or follower of an Indy Author, or an Indy artist, or an Indy jewellery maker, or an Indy musician, or any other type of independent who doesn’t have the vast resources of the mainstream, then share their posts. Share their pages. Invite your friends to like their pages. Comment on their posts. For you probably do it for pictures of kittens, and the Huffington Post, maybe the Lad Bible or the Kardashians and perhaps many, many other businesses and celebrities that you don’t know. In 2018, do it for someone you do.
And if it helps – have a picture of a kitten… 😉 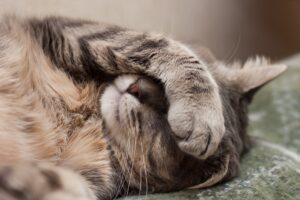 Ian Andrew
Ian Andrew is the winner of the Publishers Weekly Booklife prize for 2017 and the author of the alternative history novel A Time To Every Purpose, the Wright & Tran series of detective thrillers including Face Value and the Little Book of Silly Rhymes & Odd Verses. All are available in e-book and paperback. Follow him on social media: