Hi from the Readers’ Club with another in-depth look at one of our recommended titles and its author.
This time – Mark Fryday and Collapse of the Wave 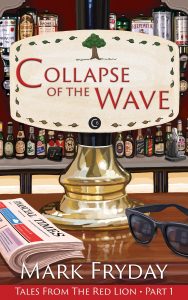 “Collapse of the Wave” – At times funny, with sharply drawn observations of mundane happenings, collapse of the wave is actually a marvellous study of love in all its guises.
Part memoir, part family drama, part philosopher’s/physicist’s musings, part diary of a regular pub-goer.
The novel is carried by its sharp dialogue and convincing characters – snapshots of life today told with an assured and familiar voice.
This is both a wryly amusing and poignant novel and offers a welcome insight into the life of one of the stoical, decent characters who can be found propping up the bar in friendly pubs up and down the country. 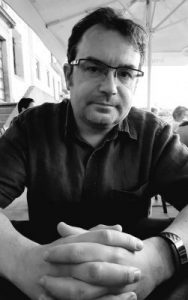 Meet Mark Fryday: I am a novelist, script-writer and member of the British Guild of Beer Writers. I was born, with another name, in Sunderland in 1970 and grew up in the North East of England. Despite having been in an admittedly little-known band, 3am Decision, and having worked in various guises in the legal sector, I have always managed to maintain a love of both the English pub and the written word. The ‘Tales from the Red Lion’ series of books is the natural result of such a love.

What was the inspiration for the ‘Tales from the Red Lion’ series? I started writing ‘Collapse of The Wave’, while sitting in a pub, celebrating finishing co-writing a sitcom script with a friend. I looked around the place, thinking of the well-known writer’s mantra ‘Go with what you know’. I wish I could say that the notion of writing about a pub came to me straight away, obvious as it should have been, but it took about another hour and a couple of pints before the idea started to form. From that day however, I wrote down ideas and observations on the memo pad of my phone while I was down the pub, rather than relying on remembering it all the next day. Well, you never remember the next day, do you? That soon made a massive difference to the amount of raw material I had to work with, and it quickly started to take shape as a novel. To protect all those who drink with me I do change all the names and details!
And thus there and then, possibly, Pub Fiction was born.

After that I thought of one chapter at a time, avoided thinking about the whole thing too much and…eventually, I got it finished. Following favourable reviews and a constant stream of being asked when the next one was coming out, added to the fact that I did leave my main character, Dan in a bit of a situation, I thought that I had better let myself and other people know what he did next. ‘Another English Civil War’ is that story.

Will there be more tales? Well, there is always the potential for more stories down The Red Lion…

What’s the underlying theme that the books deal with? Both books show the importance of the British pub in providing a space for people to connect with each other, in a way that is not done anywhere else, at least in Britain, with all those repressed emotions. These places are one of our main weapons in the battle against loneliness and mental health problems. They should be celebrated, not be under threat of existence. The main theme of Collapse of the Wave is the consequence of the deteriorating physical health of a beloved family member through the eyes of our narrator. This is, of course, a sad subject to read about, but like any night in the pub, there are always moments of joy and laughter wrapped around the melancholy.

I also try to write in a realistic way, keeping the narrative grounded in a relatable reality. This is to allow the reader to feel that they could be part of the story too, perhaps just sitting at the next table overhearing what is going on. The conversations (and there are many in this pub) also try and emulate how people actually speak, to reveal true character and relationships as much as develop any plot. This can lead to some odd digressions from time to time, much like any decent night out.

What do you hope readers will take from the book? More than anything, I’m looking to generate empathy. I open up the internal thoughts of a typical bloke-down-the pub to show that beneath that jolly carefree exterior there is the turmoil, insecurity and worry that we all deal with. Take a moment, look around and see that we all could be having a harder time than we let on, so let’s give each other a break. Or, indeed, a hug. Or a pint if you are not feeling tactile.

What are you working on next? In 2019 a friend of mine asked me if I wanted to write a musical with him. I was on my second pint so of course I said ‘yes’. A year later, we have completed the script and songs of ‘Home County’. This is the story of a southern English family who are all undergoing change, but not talking to each other about it and are thus singularly failing to understand each other. The songs often reveal what is really going on behind the words that the characters say out loud. We are hoping to put this production on locally when we can and make the script and music more widely available following that.
I have also returned to the pub in my writing, having started a series of monologue scripts under the banner ‘No. 1 at the end of the bar’. In due course, I will be putting performances of these on my Youtube channel.

*****************************************
Now, we always try to end our look at an author by asking them to take part in a modified version of the famous Proust Questionnaire that James Lipton would use at the end of the ‘Actor’s Studio” interviews…
So Mark, if you are willing:
What is your favourite word? “Done”. I am a bit of a worrier until things are ‘done’. Then I can relax. That was probably why I liked to get my homework done on a Friday night, so I could enjoy my weekend.
What is your least favourite word? “Worrier”. See above.
What is the best book you have ever read? ‘Slaughterhouse 5’ by Kurt Vonnegut. Studied this at ‘A’ Level and it changed my whole perspective on how stories can be told. Honest straightforward, and above all so much truth in there.
What is the worst – and if you don’t have a worst, then the worst book to film adaptation? There are very few books that I have not finished, and I’m not sure if that was the fault of my mood or the author’s writing, so to protect the potentially innocent, I shall spare the names. The movie version of Slaughterhouse 5 was a disappointment though, while I’m on the subject.
What sound or noise do you love? Something went off in my head when I first heard The Cure in the 80’s. Something about the sound of a guitar and a chorus pedal can make me feel, in turn, both joyous and desolate.
What sound or noise do you hate? Easy. Scraping ice. Makes my spine crawl. This can make things difficult in England for a few months each year.
What is your favourite smell in the world? There was one cat, called Jerry, I used to know who had a lovely smell, believe it or not. That scent plus some purring always made me feel so content.
What profession other than your own would you like to attempt? I did a History Degree back in the day and have always wondered what life would have been like if I had kept that up and became a historian. I still love the subject and it is perhaps even more relevant than ever.
What profession would you not like to do? I am in awe of them, but don’t think I would make a good doctor. I worry enough about my characters. I don’t think I could handle having the lives of real people in my hands.
If heaven exists, what would you like to hear God say when you arrive at the pearly gates? “Why did you lot plant such a binary morality on this place, when the universe is obviously there to teach you the lessons of a nuanced existence?” On hearing this, I would offer an understanding nod. I would then think of something great to say back to him, but sadly way after he had moved onto the next entrant.

To learn more about Mark and his books, Click Here