Hi from the Readers’ Club with another in-depth look at one of our recommended titles and its author.
This time – Pam Lynch and How The Hell Did I Get Here 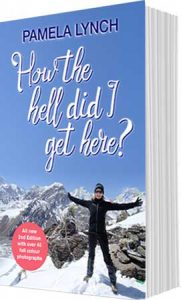 “I felt almost every step with her as she recounted her desire to stretch herself by undertaking this perilous journey.
Pam’s story about trekking to Everest Base Camp at (nearly) 60 years old is totally inspiring and motivating.
A well written and interesting account of one woman’s journey in life, which culminated in her trek to Base Camp, Everest, at the age of 60.
Pam’s recount of her trek to Everest Base Camp not once but twice was all consuming – she faced her demons and then some and survived the destructive earthquake that killed so many. 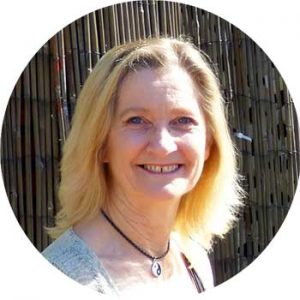 Meet Pam Lynch: I was born in the Lincolnshire steelworks town of Scunthorpe and emigrated to Western Australia with my family at age 13. Having married at 19 and raised two daughters, I made the decision at the age of 40 to return to study. Fifteen years of part-time studies at the University of Western Australia ended with me gaining a PhD in Classics and Ancient History and so, naturally, from there I decided to trek to Everest Base Camp at the age of 60. I fatefully returned to Nepal two years later and was still in Kathmandu when the major earthquake hit. This event had far reaching consequences for me and I went on from there to gain a life coaching qualification. I now encourage other women to believe in themselves and their abilities.

Having been a nomadic soul for long periods, I now live in a coastal country town in Western Australia and I’m working on my first novel. Alongside enjoying life as a writer, traveller, adventurer and motivational speaker, I’m also a very proud grandmother of four!

Thanks Pam, so what gave you the idea for How The Hell Did I Get Here? The idea for the book had been fermenting in my head for many years. It was after returning from a trek to Everest Base Camp though that I realised I had a story that I wanted to tell. I questioned why, at the age of sixty, I felt the need to challenge myself in the way I had – both physically and mentally. I began to realise and understand the extent to which I had changed over the course of my life. The way I had steered my life, from a shy naïve young bride of nineteen to a confident woman in her sixties who had learnt to thumb her nose at society’s expectations. I had grown into a woman who believed in herself and constantly challenged herself.

What’s the underlying theme that the book deals with?  That we shouldn’t be restrained or defined by society’s expectations.

What do you hope readers will take from the book? Inspiration. That everyone is capable of achieving whatever they set their mind to, whatever their age and that we need to continue growing throughout our lives.

What are you working on next? I’m currently writing a crime novel and really enjoying the process. No real surprise there to anyone who knows me. The surprise is that it took me so long to get started. I began reading crime when I was thirteen and devoured the entire Agatha Christie catalogue in my teens. It’s always been my preferred genre and I’ve gone through all the usual suspects after Agatha – Patricia Cornwell, Kathy Reichs, Elizabeth George, Jeffery Deaver, Linda La Plante, Val McDermid – could you get me another sheet of paper please, I could go on forever. Current favourites include Dervla McTiernan, Peter May, Peter James and Christian White.

*****************************************
Now, we always try to end our look at an author by asking them to take part in a modified version of the famous Proust Questionnaire that James Lipton would use at the end of the ‘Actor’s Studio” interviews…
So Pam, if you are willing:
What is your favorite word? Discombobulated – just because …
What is your least favorite word? Specific, when people insist on pronouncing it pacific.
What is the best book you have ever read? I’m going to pike out here because there’s no way I could pick a best book. Instead I’m going with the book that was one of the first to inspire me – Wild by Cheryl Strayed.
What is the worst – and if you don’t have a worst, then the worst book to film adaptation? I feel I’m repeating myself here but again, I don’t really have a worst, because if I don’t like a book, I don’t keep reading. I don’t like slow books or books with a lot of description of landscapes – give me a bit of action, a mystery or a murder.
What sound or noise do you love? The sound of silence – I can’t write with conversations or music around me, I need quiet. If we’re talking an actual sound – the ocean springs to mind – from the gentle swish of a calm wave being dragged back into the ocean to the crashing of winter waves. Maybe it’s something to do with the fact that the ocean is ever-changing, much like life.
What sound or noise do you hate? The traditional fingernails grating on a blackboard.
What is your favorite smell in the world? Favorite is difficult to pin down, but several make me smile. The smell of a privet hedge takes me back to my grandmother’s house when I was about nine or ten years old, and the German Shepherd that lurked behind the hedge scaring me to death. The smell of rain on a recently mown lawn, an apple and cinnamon pie baking, oh, and the roast dinner that it accompanied. All smells that evoke childhood memories. I also love the smell of a good incense or candle burning in my house – possibly aiming to calm this frantic brain.
What profession other than your own would you like to attempt? A Forensic Anthropologist – my PhD thesis was on the mortuary archaeology of Roman Britain and I am constantly fascinated by the amount of information we can glean from the remains of a person. Not just the basics of age and gender but where they were born, their occupation, their lifestyle, their health and so much more. I could go on, but I think you get the message.
What profession would you not like to do? I couldn’t be in the medical profession, I couldn’t handle the responsibility that comes with it.
If heaven exists, what would you like to hear God say when you arrive at the pearly gates? We need to keep our eyes on this one, no telling what she’ll get up to.

To see more about Pam’s book, “How the Hell Did I Get Here” click this link.

That’s all from us for now.
Take good care, stay safe and well, and well-read,
From Jaz and the Leschenault Press Team