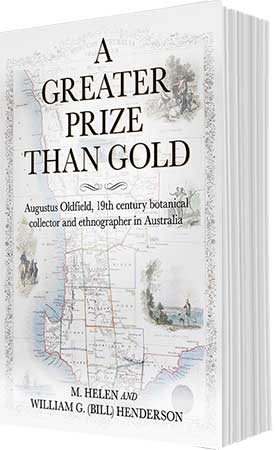 A Greater Prize Than Gold

A Major New Academic Study in the History of
Australian Botany and Ethnography
by M. Helen and William G. Henderson

Augustus Oldfield trekked throughout Australia from 1845 to 1862 amassing plant specimens that would be used to describe over 700 species new to science, including twenty-one that would ultimately bear his name.

Collecting extensively in Western Australia and Tasmania, he also conducted smaller, yet still relevant, botanical expeditions in New South Wales, Victoria and South Australia for the National Herbarium of Victoria and the Royal Botanic Gardens in Kew, London.

In the west he collected from the Great Bight to Shark Bay and made important discoveries in areas including Albany, Busselton, Bunbury, Kojonup, Perth and north of Geraldton. On the lower Murchison River, he encountered and travelled extensively with an indigenous group, the Watchandieand his paper on this group is the only ethnographic record of them at the onset of European settlement.

Yet, despite these achievements, the published historiography is virtually devoid of information about him, mainly due to him being an outsider to the ranks of the era’s ‘Gentlemen naturalists’.

Never appropriately recognised in either Australia or his native Britain, this comprehensive biographical work, twenty years in the making, fills that gap and places Oldfield’s career within the context of his immediate family and the scientific, environmental and broader socio-cultural contexts of the time. Starting with his childhood, raised in the gambling dens of London, through his amazing journeys on the far-flung shores of Britain’s Australian colonies, to his untimely death, this book finally tells the story of a man who, driven by his love of nature, turned his life over to the pursuit of a greater prize than gold.

MORE ABOUT HELEN AND BILL