Authors, Dr Ian Abbott and Dr Andrew A Burbidge are well-qualified to write on the topic of Western Australia’s over 3,500 islands. Graduates of Australia’s premier universities, Ian holds a BSc, PhD, and DSc having studied zoology, geography (statistics, soils), biometry (agricultural statistics), and botany. Andrew was awarded a BSc (Hons) and PhD, both in the field of zoology. In 2014, Andrew was appointed an Officer in the Order of Australia (AO), recognising his distinguished service to the environment as a conservation biologist.

Although both trained as ecologists, their research initially focused on different areas, with Andrew studying freshwater tortoises, and Ian, land birds. They first visited a WA island in 1967 and 1974 respectively, since which time they have each visited more than 100 of Western Australia’s islands, and studied several for extended periods. Becoming familiar with the flora and fauna, they came to appreciate the variety and uniqueness of island environments.

Ian worked as a research scientist and manager in several Western Australian public departments from 1979 to 2014. Much of his research was in jarrah forest ecology (plants, soil fauna including earthworms, birds and the impact of logging and fire on these species). His island research mostly took place in the 1970s and emphasised the development of better conceptual models of how island ecosystems function and the evaluation of the many factors that influence island ecology.

Andrew worked as a research scientist and manager for a series of Western Australian conservation departments from 1968 to 2002, where he had a strong focus on threatened species. His research and management work included conservation reserve design and selection; biological survey, especially in the Kimberley, western deserts and islands; island research and management including the eradication of invasive species, translocations and biosecurity; and indigenous oral history of mammals and fire.

From 1992 to 2001 Andrew was chair of the Australian Government’s Endangered Species Advisory Committee and Endangered Species Scientific Committee. He has been a member, currently chair, of the Western Australian Threatened Species Scientific Committee for some decades. From 2006 to 2012 he was a member of the Board of Directors of WWF-Australia, having previously served two terms on its Scientific Advisory Committee. Since 2008, he has been a member, now chair, of the Gorgon Project’s Quarantine Expert Panel, having previously advised on biosecurity for Barrow Island. He was a member of the Wunambal Gaambera Aboriginal Corporation’s Uunguu Evaluation and Monitoring Committee from 2011 to 2020.

Both authors, having been employed in the WA Public Service for many decades, published numerous papers in widespread scientific journals. (A full list is available on Google Scholar). Often cited by other scientists, these papers helped inform understanding of aspects of the ecology and biogeography of Western Australia. Their research on islands has also had a practical effect in preserving the biological characteristics of WA islands.

Their collaborative text, Island Jewels – The Natural History of Western Australia’s Islands will become a definitive work on the fascinating and unique environments of these magnificent environments. 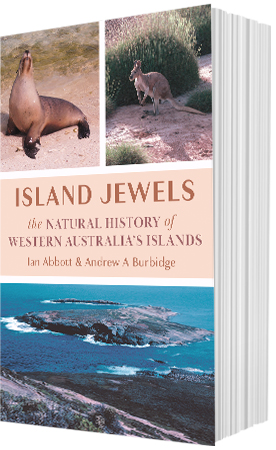 by Ian Abbott &
Andrew A. Burbidge 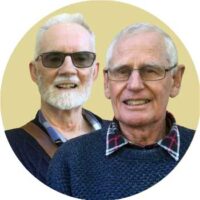