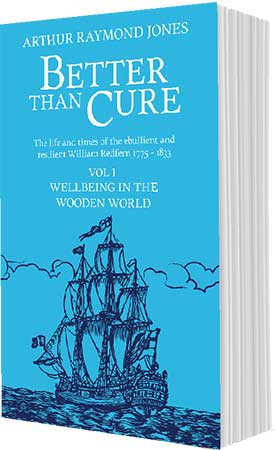 From his birth in approximately 1775 to joining the Royal Navy as a ship’s surgeon, it seemed William Redfern was destined for a life of relative wealth and status, but all that changed in 1797, when he was swept up in the infamous Nore Mutiny. At odds with his fellow officers, Redfern was court-martialled for his actions and sentenced to be hanged.

Due to his profession, the sentence was commuted to transportation for life and on arrival in New South Wales, his exceptional surgical skills quickly saw him granted a full pardon. He was soon central to the new colony’s medical services, was appointed personal surgeon to the Governor and Assistant Surgeon of the Colonial Medical Services, but despite becoming a wealthy landowner in his own right, he would forever carry the ‘convict’s stain’ in the eyes of certain members of the British Colonial establishment.

Remembered for the Sydney suburb that bears his name, this outstanding biography, in two volumes, breathes fresh life into the story of William Redfern and follows the rise and fall and subsequent rise again of one of Australia’s most influential early settlers. A pioneer of immunisation techniques and an advocate for the role of hygiene and nutrition he truly was one of the first to understand that prevention was better than cure.