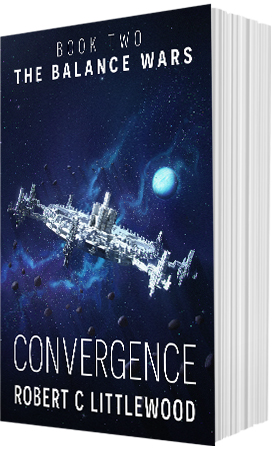 The Dorath Mar have been defeated and the Graaven people feel safe within their adopted home; the ‘City’. But the defeat of their nemesis is not their hoped-for deliverance, instead, it has only served to reveal the true power behind the Dorath Mar’s evil.

Menkh, last and greatest Graaven general, the symbiote Crixac and the adepts who guard the Balancepoint, will journey across the cosmos in order to defeat the enemy, lest chaos reign supreme.

While their quest continues, Tishan Dar, faces a new threat on the Graaven home world. The Xotic call for aid against new and brutal invaders and Tishan must deploy the might of the City to protect all the Graavens hold dear.

As the mission to reset cosmic balance goes on, events spiral towards their climactic conclusion in Convergence , the outstanding continuation of The Balance Wars.