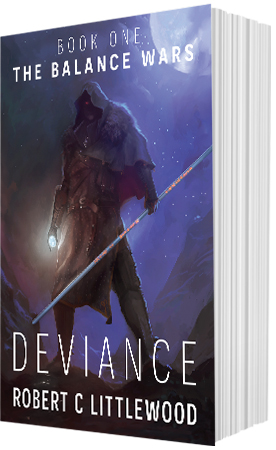 On the remote world of Tarvuli the mighty Graaven Empire has fallen into ruin, destroyed by an alien force whose presence threatens cosmic balance.

Menkh Ab Dur, deposed Emperor, last and greatest Graaven general has fled the capital along with warriors of the élite Imperial Guard and a mass of refugees, in an effort to escape the holocaust. Relentlessly pursued by those they have christened the Dorath Mar, Menkh himself is dying from a malignant growth. The Graaven race stands on the brink of annihilation.

Against all odds Menkh is aided by the symbiote, Crixac – harnessing the power of the City, a long-abandoned source of great energy. As unseen cosmic forces move, Menkh and Crixac journey on a quest to restore the crystal at the heart of the City.

The Dorath Mar must be defeated or the City and the secrets it contains will not just destroy the Graaven, but will be used as a weapon for the domination of all life.

Balance must be restored and it begins with Deviance.