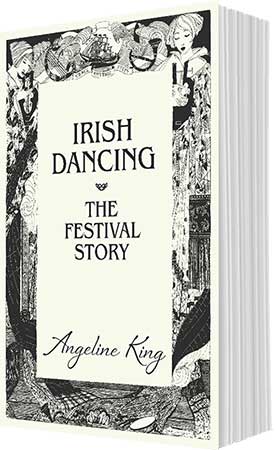 The two strands within Ulster’s Irish dancing heritage are the festival tradition and the feis tradition, the former named after the musical festivals, the latter after the Gaelic League feiseanna. Differences between Ulster’s musical festival dancers and feis dancers would have been barely noticeable to the untrained eye up until the 1990s when feis and festival dancers wore similar attire, but they are now more pronounced, with feis dancers wearing wigs and modern costumes and festival dancers holding onto some semblance of tradition. Those physical differences are often noted by observers, but the festival tradition also challenges preconceptions of cultural silos in Northern Ireland, and demonstrates a rich, shared history between Catholics and Protestants.

From the first Irish folk dancing festival in Larne in 1928, the festival tradition of Irish dancing has played a significant part in Ulster’s culture. This historical account takes the reader on a journey from courtly ballrooms and cottage firesides across a landscape of barn dances, harvest homes, fancy dance classes, feiseanna and festivals, narrating how Catholic and Protestant children held hands in Town Halls, Parochial Halls and Protestant Halls even when bombs splintered communities and deepened mistrust.

Highlighting the various provincial towns that nurtured and helped grow the movement throughout the 20th century, this work explores significant figures in the development of both ‘feis’ and ‘festival’, the champion dancers, influential teachers and unsung community ‘heroes’ who kept this cross-community activity alive. The festival tradition has, for ninety years been an often overlooked, yet vibrant and vital part of Irish Dancing…

This is its story.