Hi from the Readers’ Club with another in-depth look at one of our recommended titles and its author.
This time – Dean P.R. Buswell and the phenomenal
‘The Order of Elysium’
The first in a new trilogy of urban fantasy novels where a legion of worthy humans fight alongside angels

A refreshing take on urban fantasy – The Order Of Elysium is an exciting, fast-paced urban fantasy with plenty of action and plot twists.

Immersive and captivating. Ruthless without apology. [It] doesn’t skip a beat when it comes to enveloping you in a conflict that is both daunting and captivating. Instantly gripping the reader and propelling them into a harsh and unforgiving global, yet secret war.

Meet Dean Buswell: I was born in Western Australia and to be honest have not gone very far since. I’ve grown up and spent the vast majority of my time in Perth’s southern suburbs, mostly in the Rockingham area. When I was in primary school I had a keen interest in history and reading and through a special class that taught additional elective subjects, I discovered I had a love for creative writing. In High School I developed a passion for computer science, though due to life’s many twists and turns I was never able to pursue it for long. 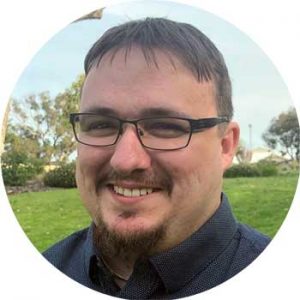 After leaving school I worked various jobs but have been in the security industry for the last eight years. While not glamorous, the night-shift work allows me a bit of extra writing time so that works perfectly for me. In August, my wife and I celebrated our three year anniversary and we have quite literally just welcomed the arrival of our very first little one!

Awesome news, congratulations to you and your wife. Now, the Order of Elysium is the first in the Aetheric Wars Trilogy. What gave you the original idea? The book on the shelves today is the result of a long, almost evolutionary process. When I was younger my friends and I would post original ideas on a “roleplay forum”. Imagine it like a written version of Dungeons and Dragons where each participant would write out the actions of their character and the leader would drive the narrative. I came up with a basic outline involving a secret society of demon hunters. After the roleplay fizzled out, I had a second spark of inspiration from Norse mythology, which flooded me with ideas to expand on my original thoughts. Fast forward five years and many, many drafts, redrafts and edits later and you have what it is today.

What’s the underlying theme that the book deals with?  Generally, I think themes are what the reader makes of them. Though a certain caution against blind obedience and the importance of questioning those in power is definitely a driving force in the narrative.

What do you hope readers will take from the book? Honestly, just entertainment. And if they like it enough, I hope it brings them inspiration for the wider “fantasy genre” like many books have done for me.

What are you working on next? I’m currently focusing most of my spare time on book #2 in the trilogy, The Vaults of Erebus. Though I am also doing a lot of world-building for a fantasy series I plan to bring to fruition in the future and of course, I am mostly looking forward to the arrival of our first baby in September!

*****************************************
Now, we always try to end our look at an author by asking them to take part in a modified version of the famous Proust Questionnaire that James Lipton would use at the end of the ‘Actor’s Studio” interviews…
So Dean, if you are willing:
What is your favourite word? Quesadilla. Because it’s always funny when people say it wrong.
What is your least favourite word? Irony. It’s not so much the word, but the frustration attached to it when it gets used incorrectly. Looking at you, Morissette.
What is the best book you have ever read? The Name of the Wind by Patrick Rothfuss. Few have come close, but I’ve yet to read anything I’ve enjoyed more thoroughly than this book and its sequel.
What is the worst – and if you don’t have a worst, then the worst book to film adaptation? I wouldn’t feel right calling out another author’s work. So, my least favourite adaptation would have to be Ready Player One. I loved the book, but the movie, while entertaining in it’s own right, left out so much of the story’s soul, leaving us with nothing but a movie of fan-service.
What sound or noise do you love? Clichéd, I know, but rain and the distant sound of thunder. Something about the wrath of nature is soothing…
What sound or noise do you hate? The sound of someone eating. If I can hear you from the other side of the room, I think you may be doing it wrong.
What is your favourite smell in the world? The smell of burning wood around a campfire is definitely my favourite smell. Love how it stays on your clothes the next day too.
What profession other than your own would you like to attempt? Something in the computer science field. Programming and Game Development most likely.
What profession would you not like to do? Chef. I love to cook and have often wondered what it would be like to have professional training, but to actually work in a kitchen wouldn’t suit me. I think doing something you love only mitigates a certain amount of stress that thing may come with, until it ruins it.
If heaven exists, what would you like to hear God say when you arrive at the pearly gates? We don’t need to read your book, I’m sure there aren’t any blasphemies in there.

Thanks Dean! I am sure heaven would welcome you in with an honour guard of Elysium Angels…

To see more about The Order of Elysium – click this link.

That’s all from us for now.

Take good care, stay safe and well, and well-read,
From Jaz and the Leschenault Press Team